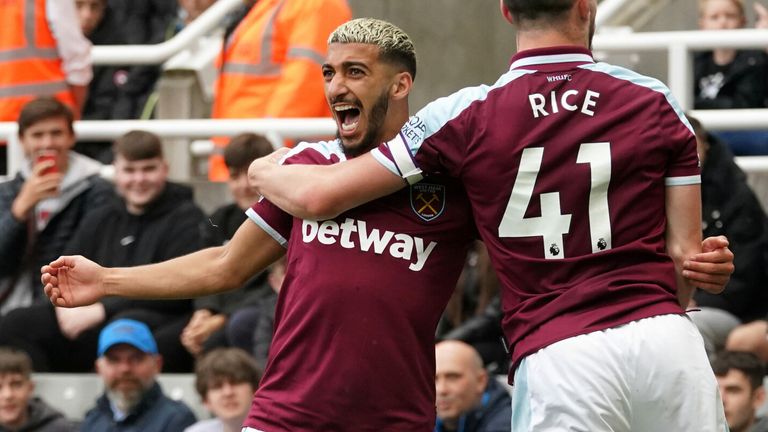 West Ham picked up where they left off last season after a superb second-half performance saw them beat Newcastle 4-2 in their Premier League opener.

It was an entertaining match throughout, but West Ham were in devastating form after the break. They scored three goals in a 13-minute blitz that Newcastle were unable to recover from, with Steve Bruce’s side having no shots on target in the second half.

However, with a packed St James’ Park behind them for the first time since February 2020, it was the Magpies who took an early lead. Callum Wilson (5) marked his first game in the famous Newcastle No 9 shirt with a fine goal, nodding home inside five minutes.

It did not take long for West Ham to level though, as Aaron Cresswell’s goal (18) – which was initially ruled out for offside – was correctly awarded after a VAR review. Newcastle then re-took the lead just before half-time as Jacob Murphy (41) scored his first goal at St James’ Park.

Said Benrahma (53) nodded West Ham ahead shortly after the break, before Tomas Soucek (63) slotted home after Michail Antonio’s penalty was saved by Freddie Woodman. But Antonio – another player assigned a famous No 9 shirt over the summer – nabbed his goal after a wonderful counter-attack (66). It was his 47th Premier League goal for West Ham, going level with current leader Paolo Di Canio.

The Hammers have now scored 3+ goals in their last three Premier League outings either side of the summer break and won their opening Premier League game for the first time since 2015. As for Newcastle, they were unable to follow up their two end-of-season victories with another.

The fast start from both sides at St James’ Park set the tone for the game. An early corner saw Miguel Almiron head a Soucek effort off the line, but minutes later, Newcastle were ahead.

Allan Saint-Maximin held the ball up wonderfully down the right, using all his tricks to bamboozle Declan Rice. He then lifted a cross into the middle and Wilson was waiting, having found an inch of space ahead of Craig Dawson and Vladimir Coufal, and nodded home from close range.

Man of the match: Michail Antonio.

But West Ham reacted well and levelled things up in the 18th minute. The goal was initially ruled out for offside with Jarrod Bowen the last to touch it, but VAR reviewed the goal. In the end, Cresswell’s curling cross into the area actually ended up evading everyone in the area and sneaking in at the back post, with Bowen – who was offside – only poking the ball further into the net once it had crossed the line.

Bowen could have nabbed his own goal five minutes later in a topsy-turvy, end-to-end period in the game. He made a fabulous run from midfield, skipping past several Newcastle shirts, but his eventual strike forced a superb save from Premier League debutant Woodman. At the other end, Jonjo Shelvey clipped the ball forward for Wilson, but his audacious backheeled effort was easily saved by Lukasz Fabianski.

Newcastle had another glorious effort just before the half an hour, and Saint-Maximin was again involved. He made a run to the top of the area, drawing in defenders, before picking out Almiron to his right. The forward struck, but his effort just clipped the top corner of the crossbar.

Late in the half, and Newcastle took the lead for a second time. Matt Ritchie did well to chase down a heavy pass from Almiron, before standing up a wonderful cross into the area. Among the melee in the middle was Murphy, who popped up with a dinked header that caught the West Ham defence off-guard and rolled into the back of the net.

It took just eight minutes after the break for West Ham to respond again. It all began with Rice robbing Saint-Maximin in midfield, but Antonio did well to send in a cross after a heavy first touch from Bowen’s pass. Benrahma used his movement to sneak in between the defenders before nodding the ball home – already matching his tally of one Premier League goal from last season.

Ten minutes later, and Antonio hit the post before West Ham were awarded a penalty immediately after – a decision Sky Sports’ Michael Dawson described as ‘criminal’ and ‘so, so soft’. Pablo Fornals and Murphy both chased down the loose ball after Antonio hit the post, with Murphy sliding in on the West Ham man.

Martin Atkinson pointed to the spot, with a rather lengthy VAR review concurring with his decision. Antonio took the penalty, but it was a wonderful save from Woodman to keep him out. However, the Newcastle defence were too slow off the mark, with Soucek storming ahead to slot home and put West Ham in the lead for the first time.

West Ham rounded off their victory with a sucker-punch fourth shortly after. It was a superb counter, started off by Antonio deep in the West Ham area, picking out Benrahma down the left. He then burst down the field, as his team-mate held the ball up before slotting him through. It was then a placed finish past Woodman to mark his first game in West Ham’s No 9 shirt in style.

Man of the match – Michail Antonio

It was a brilliant performance from Antonio and Newcastle were arguably lucky he did not score more than one goal. He was met by a wonderful Woodman save for his penalty, but has still matched Di Canio’s record for Premier League goals for West Ham.

Sky Sports co-commentator Andy Hinchcliffe said: “I think pre-match, the attention was on Callum Wilson and Allan Saint-Maximin but Michail Antonio has completely outdone them. He was involved in the first goal, set up Said Benrahma’s goal, and scored a brilliant counter-attacking goal himself.

“He has covered so much ground for the team. He wanted to be West Ham’s number nine and he has had an enormous impact on this result today.”

Newcastle will travel to Aston Villa on Saturday in the Premier League; kick-off 3pm. West Ham will host Leicester on the first Monday Night Football of the season on August 23, live on Sky Sports; kick-off 8pm.

Can My Retirement and Social Security Be Garnished?

USWNT remain No. 1 ranked team in the world