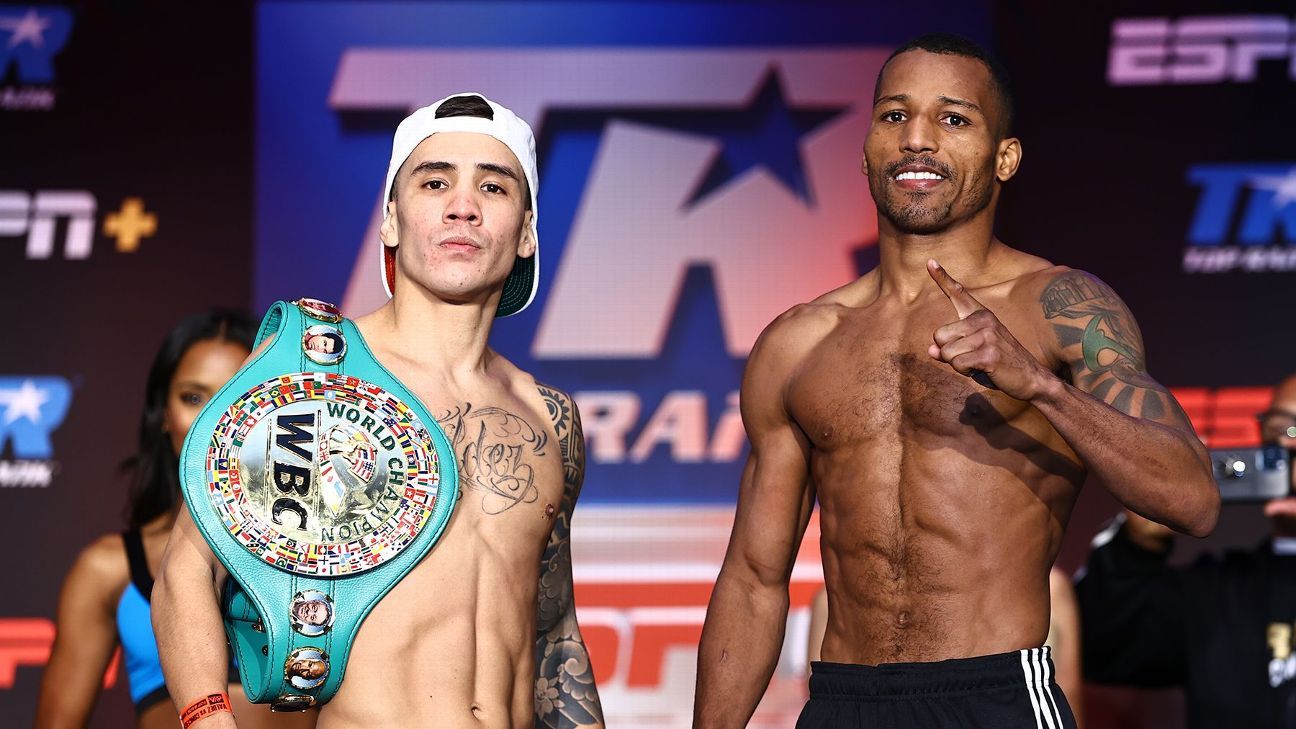 Valdez tested positive for the banned substance phentermine in August, but the Pascua Yaqui Tribe Athletic Commission allowed Valdez to fight at the Casino Del Sol. The WBC decided not to strip Valdez of his title, stating that “this is not a performance-enhancing drug” and that “Valdez will have absolutely no advantage and the challenger will have no risk.”

Top Rank Boxing is on ESPN and ESPN+. Subscribe to ESPN+ to get exclusive boxing events, weigh-ins and more.

Valdez (29-0, 23 KOs), 30, of Nogales, Sonora, Mexico, won the title by defeating Miguel Berchelt by a 10th-round TKO in February in a great performance.

Conceicao (16-0, 8 KOs), 32, of Salvador, Bahia, Brazil, has won three of his past five fights by stoppage, including a seventh-round TKO victory over Jesus Antonio Ahumada in April.

Xander Zayas remained unbeaten in his first fight at junior middleweight but proved he still has much to learn.

The 19-year-old Puerto Rican defeated Jose Luis Sanchez via unanimous decision — 60-53, 60-54 and 60-53 — in his toughest test to date and laid a sustained beating for most of the six-round fight, but he also showed some flaws that need to be fixed in the gym.

Zayas (10-0, 7 KOs) was an offensive machine and showed good punch variety and aggression, but he also received his fair share of shots throughout the fight. In Round 3, Zayas connected with a big left hook that floored Sanchez, but the referee missed the knockdown.

“The heat got to me a little bit in the later rounds,” Zayas said after the fight. “We knew it would be hot here in Arizona. We also knew that Sanchez was a tough opponent. He comes from a tough fighting family, and he’s a proud Mexican warrior. I knew he was coming to fight. We did the job, I listened to my corner, boxed him, and got the unanimous decision. That’s the most important thing.”

Sanchez (11-2-1, 4 KOs) was coming off a draw with former title challenger Adrian Granados. The 28-year-old native of Albuquerque, New Mexico, was bleeding profusely by the end of the fight.

Lindolfo Delgado, a 2016 Olympian, scored a second-round stoppage of Miguel Zamudio to improve to 13-0 (12 KOs).

The 26-year-old Mexican laid a beating on Zamudio from the opening bell and scored a knockdown in Round 2 with a right hand. Zamudio (45-18-1, 28 KOs) beat the count but was stopped on his feet 50 seconds into the round.

Zamudio, 30, has won just one bout in his past six fights. Delgado, a 140-pound prospect, signed with Top Rank earlier this year.

Rene Tellez Giron broke down Eduardo Garza before scoring a knockout in Round 7, the result of a brutal left hook to the body.

Giron (16-1, 10 KOs) delivered a short right uppercut, a throwaway punch meant to bring Garza’s hands down, before slipping the liver shot in, sending Garza to the mat in agony. The 22-year-old Mexican fighter scored a shocking upset of Carlos Balderas in 2019 on the heels of his first professional defeat earlier that year, a unanimous-decision loss to impressive prospect Michel Rivera. Suddenly, Giron is a fighter to watch at 130 pounds.

Omar Aguilar, 22, improved to 22-0 (21 KOs) with a second-round KO of Carlos Manuel Portillo. The lanky 140-pounder scored a knockdown in the closing seconds of Round 1 and then finished him off with two more knockdowns in the opening moments of the second round.

Following the third knockdown, Portillo was favoring his right eye while on the canvas as the ref reached the count of 10. A compact left uppercut inflicted the damage on the eye and gained Aguilar the win in his first fight outside of his native Mexico.

Building in Nigeria Had ‘Abnormalities’ Before Collapse