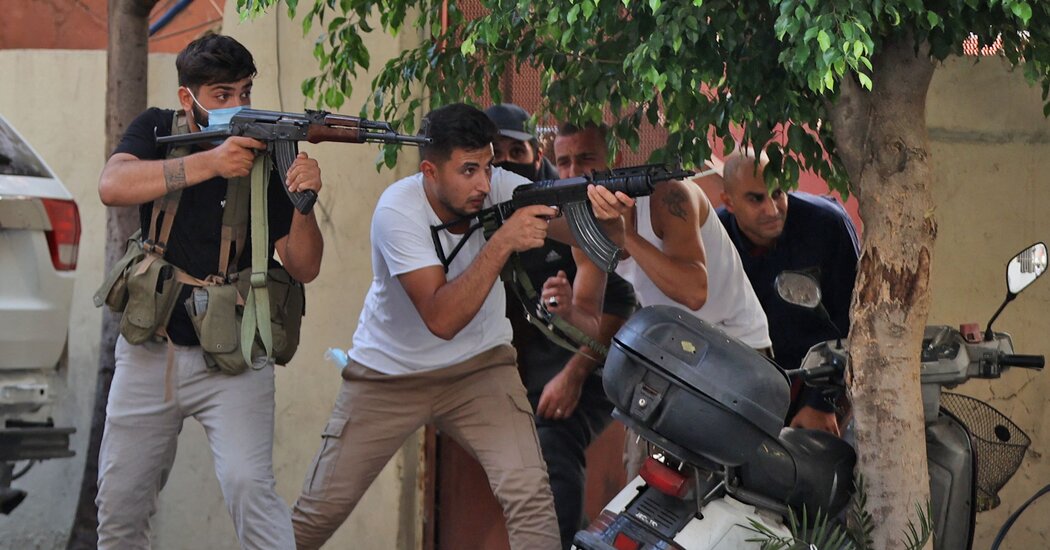 Heavy gunfire echoed through the streets of Beirut on Thursday after a morning of protests descended into the worst sectarian violence in years, leaving at least five dead and 30 wounded, the Lebanese authorities said.

The clashes erupted amid a protest led by Shiite political parties, including Hezbollah, a militant group backed by Iran, to push for the removal of the judge investigating the August 2020 Beirut Port explosion. The judge, Tarek Bitar, has indicted a range of officials, including members and allies of the Shiite parties, who have accused him of political targeting.

The violence — mostly between Shiites and Christians — laid bare deep sectarian tensions that have been exacerbated by an acute economic crisis and the near collapse of the state.

The small Mediterranean country has 18 recognized sects, including Sunni and Shiite Muslims, various denominations of Christians and others. Conflicts between them and their militias define the country’s politics and have often spilled over into violence.

Witnesses on Thursday described initial gunshots from high buildings that appeared to be from unidentified snipers, followed by clashes with automatic rifles in the surrounding streets. As medics scrambled to evacuate the dead and wounded, residents cowered in their homes, worried that the events could set off a new round of violence in a country with a long history of civil strife. Heavy smoke billowed from fires lit in streets to block access to the area.

Hezbollah supporters accused gunmen from the Lebanese Forces party, a Christian political movement staunchly opposed to Hezbollah, of attacking the protesters. In a statement, Hezbollah and the Amal Movement, another Shiite political party, accused unnamed parties of opening fire on peaceful demonstrators in an attempt to “drag the country into a deliberate strife.”

“It is still really tense around us,” Joseph Musalem, a security guard at a school near the clashes, said by telephone. When the clashes broke out, school employees had rushed the children to the basement for protection, and some parents were able to rush to pick them up. Others were still waiting in the basement for calm.

“Hopefully the shooting will calm down so we can move and go back home,” Mr. Musalem said.

The Lebanese military deployed to try to calm the streets, responding to reports of snipers hiding on rooftops and running gun battles. By midafternoon, the clashes appeared to have subsided after about four hours, but residents still cowered in their homes.

Tensions have been running high in Beirut over an investigation into the port blast, which killed more than 200 people and did extensive damage to the capital. Lebanon is also in the throes of a financial collapse that the World Bank has said could rank among the world’s worst since the mid-1800s.

The violence broke out in an area straddling the border between two neighborhoods with longstanding tensions — one a stronghold for Shiite Muslim groups and another for Christians.

Prime Minister Najib Mikati called for calm as the army urged civilians to leave the area, warning that soldiers would shoot anyone who opened fire.

There were also reports of runs on banks as people desperately sought to withdraw their money.

Since the fall of 2019, the Lebanese pound has lost 90 percent of its value, and annual inflation last year was 84.9 percent. As of June, prices of many consumer goods had nearly quadrupled in the previous two years, according to government statistics.

The huge explosion last summer in the port of Beirut, which left a large swath of the capital in shambles, only added to the desperation.

When the first shots rang out as protesters gathered on Thursday morning in central Beirut, it was not clear where they had come from or who was firing. But before the streets descended in chaos, tensions over an investigation into the August 2020 port explosion had been growing for weeks.

The explosion killed more than 200 people and wounded thousands as wide swaths of the city were destroyed or damaged.

The blast was caused by the sudden combustion of whatever was left of 2,750 tons of hazardous chemicals that had been unloaded into the port years before. Many Lebanese saw the blast, and the efforts by powerful politicians to hobble the investigation into its causes, as a stark example of the country’s deep dysfunction.

Former Prime Minister Hassan Diab and his cabinet resigned, and for a year the country was without a functioning government. In September, Najib Mikati, a billionaire telecommunications tycoon, became prime minister.

But even as a new government took shape, tensions over the port investigation grew deeper.

The inquiry was suspended this week after two former ministers facing charges lodged a new legal complaint against the judge carrying out the investigation.

Families of the victims condemned the move, with critics saying that the country’s political leadership was trying to shield itself from accountability for the largest explosion in the turbulent country’s history.

Hezbollah has grown increasingly vocal in its criticism of Judge Tarek Bitar.

On Monday, the judge had issued an arrest warrant for Ali Hussein Khalil, a prominent Shiite member of Parliament and a close adviser to the leader of the Amal party. The warrant leveled serious accusations against Mr. Khalil.

“The nature of the offense,” the document read, is “killing, harming, arson and vandalism linked to probable intent”

Two days ago, the Hezbollah leader Hassan Nasrallah issued some of his most scathing criticism of the judge, accusing him of “politically targeting” officials in his investigation.

The group’s followers joined the protest to call for the removal of Judge Bitar on Thursday when shots rang out. Witnesses said snipers were targeting the demonstrators.

That was the spark that set off some of the worst sectarian clashes in years. By late afternoon, the guns had fallen silent after four hours of gun battles, but the streets were still tense, as residents cowered in their homes.

Judge Tarek Bitar is the second judge to head the investigation to determine the exact cause of the August 2020 explosion at Beirut’s port and to hold those responsible for it accountable.

From the start, he was expected to face the same challenges as his predecessor: legal and public relations maneuvers by powerful politicians and other officials in Lebanon who have long operated with impunity, protected by laws that they argue shield them from prosecution.

Efforts to investigate the circumstances surrounding the explosion have proceeded slowly amid characteristically fierce resistance from politicians, leaving many Lebanese fearing that once again the powerful will escape any blame.

Since his appointment in July, Judge Bitar has summoned a range of powerful politicians and security officials for questioning as suspects. Many have refused to appear or filed cases seeking to have him removed, accusing him of politicizing the investigation.

He set multiple dates to question the former prime minister, Hassan Diab, who has refused to appear and traveled to the United States on what Mr. Diab said was a pre-scheduled trip before he was to see the judge.

Judge Bitar has also summoned for questioning or indicted Gen. Abbas Ibrahim, the head of the General Security and Lebanon’s most powerful security official; senior army officers; and a number of lawmakers and former ministers, including a former finance minister, Ali Hassan Khalil; a former transportation minister, Ghazi Zaiter; and a former interior minister, Nouhad Machnouk.

Judge Bitar wanted to question the three former ministers on suspicion of homicide with probable intent and criminal negligence, the state-run National News Agency said at the time.

He also asked the bar associations in Beirut and Tripoli, the country’s two largest cities, to lift the immunity that is conveyed by membership for Mr. Khalil, Mr. Zaiter and a former transportation minister, Youssef Finianos.

At stake, legal experts said, was a political culture that has long protected powerful officials from legal scrutiny.

“There is no shortage of allegations of corruption and human rights violations against high level officials in Lebanon, but there has been a culture of impunity that has allowed to them to escape accountability for their actions,” said Aya Majzoub, a Lebanon researcher with Human Rights Watch.

A Lebanese court removed him based on a request by Mr. Khalil and Mr. Zaiter, basing its decision, in part, on the argument that Judge Sawan lacked impartiality because his home had been damaged in the blast.

Lebanon, a small Mediterranean country still haunted by a 15-year civil war that ended in 1990, is in the throes of a financial collapse that the World Bank has said could rank among the world’s worst since the mid-1800s.

The crisis is closing like a vise on a population whose money has plummeted in value while the cost of nearly everything has skyrocketed.

Since fall 2019, the Lebanese pound has lost 90 percent of its value, and annual inflation in 2020 was 84.9 percent. As of June, prices of consumer goods had nearly quadrupled in the previous two years, according to government statistics.

The huge explosion a year ago in the port of Beirut, which killed more than 200 people and left a large swath of the capital in shambles, only added to the desperation.

The blast exacerbated the country’s economic crisis, which was long in the making, and there is little relief in sight.

Years of corruption and bad policies have left the state deeply in debt and the central bank unable to keep propping up the currency, as it had for decades, because of a drop in foreign cash flows into the country. Now, the bottom has fallen out of the economy, leaving shortages of food, fuel and medicine.

All but the wealthiest Lebanese have cut meat from their diets and wait in long lines to fuel their cars, sweating through sweltering summer nights because of extended power cuts.

A New York Times visual investigation looked into the causes behind the disaster, which killed more than 200 people and was so powerful that the second explosion was felt as far away as Cyprus.

Three developments since 2019 have worsened the situation in Lebanon.

First, the government tried to raise money by imposing a tax on all WhatsApp calls, which many Lebanese families use because phone calls are so expensive. The tax infuriated people — many of whom saw it as another example of government-imposed inequality — and prompted large and sometimes violent protests.

Third, huge explosions at the port in Beirut, Lebanon’s capital, in August 2020 killed more than 200 people and destroyed several thriving neighborhoods. A lot of people couldn’t afford to fix their homes.

Lebanon formed a new government last month, for the first time since the explosion. The prime minister is Najib Mikati, a billionaire who has held the position two previous times since 2005.

The French government and other outsiders have pushed the Lebanese government to enact reforms, but there is little evidence that it will. The Biden administration, focused on other parts of the world, has chosen not to become deeply involved.

Many Lebanese families are relying for their survival on money transferred from family members living in other countries.

The only thing keeping a lot of people in Lebanon afloat is that most families have relatives somewhere abroad.

Returns on my investments