“Can anybody beat the Patriots right now?!”

This is not the early 2000s, where the New England Patriots won three out of four Super Bowls, nor 2007 when they threatened to go the season undefeated. We thought Tom Brady’s exit in 2020, after another successful streak of three rings in five years, had signalled a new era in the NFL – New England finished 7-9 last year without their leading man at quarterback, their first losing record in two decades.

Yet, as Sky Sports’ Neil Reynolds poetically put it. it appears the ‘Evil Empire’ is back; the Patriots have won five-straight to sit at 7-4 on the season, comfortably in contention for not only a playoff spot in the AFC but maybe a division title, with two tussles against the East-leading Buffalo Bills (7-4) to come, and perhaps even a conference crown. 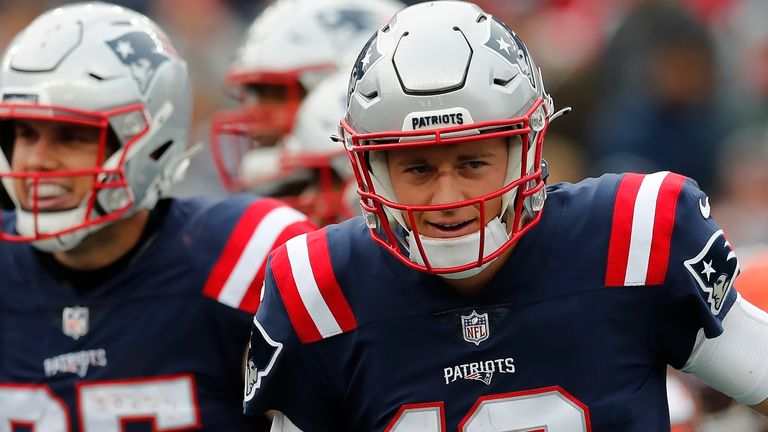 Former NFL offensive lineman Brian Baldinger questions whether anyone can beat the New England Patriots after the team won a fourth-straight game.

Former NFL offensive lineman Brian Baldinger questions whether anyone can beat the New England Patriots after the team won a fourth-straight game.

“They’ve found their mojo. I don’t know if it was the [Dallas] Cowboys defeat, or the Tampa Bay [Buccaneers] one that gave them the little jolt they needed, but they’ve won six of their last seven, the offense has turned a corner after being sluggish early in the year – the offensive line has got healthy, they’re dominant and Mac Jones continues to make plays.”

New England’s most recent defeats were indeed a Week Six loss to the Cowboys in overtime and a two-point reverse to Brady’s defending Super Bowl-champions on his much-publicised return to Foxborough in Week Four. They also suffered early-season losses to the New Orleans Saints and Miami Dolphins. It hasn’t always been flashy. The Patriots rank in the middle of the pack for total offense (17th, 351.8 yards per game), though their defense has been one of the league’s better outfits – third in total (313.2 YPG allowed) and the best of the bunch in scoring (16.1 points per game).

New England’s run and the way they’ve gone about it has garnered comparisons with another unfussy, uncomplicated team that shocked NFL observers in their run to a first Super Bowl title 20 years ago – one which started a dynasty.

“I feel like we’re sitting here, watching a repeat of history – we’re watching the 2001 Patriots all over again,” Simms said.

“It’s the same story. He [Belichick] is starting to build another dynasty; big, physical defense, good corners and a secondary that is well coached and creative on that side of the ball; offensively they can run the ball, control the clock and they’ve got a quarterback that makes a handful of clutch throws every game.”

The 2001 Patriots, at the same stage of the season, held a 6-5 record before getting hot down the stretch, riding an impressive, underrated defense and a talented, young ‘rookie’ quarterback all the way to a title.

Brady was in fact in his second season when he saw the field for the first time in taking over from an injured Drew Bledsoe in Week Two. But his and Jones’ numbers from their first 10 career NFL starts are eerily similar.

Jones may have been the 15th overall pick from the 2021 NFL Draft – a whole 184 selections sooner than Brady was taken in 2000 – but they also share in common that they were overlooked by much of the league before ultimately being picked by the Patriots. The four quarterbacks taken ahead of Jones could well become as infamous as ‘the Brady six’ selected ahead of him – Jones’ seven wins this season are more than the other rookie QBs in his class combined (5-26).

Jones had his own struggles to start the season, throwing six interceptions in as many games (four of which were defeats), but over the Patriots’ winning run he has tossed seven touchdowns and been picked off only twice. He has also posted a completion percentage of plus 70 in seven games so far this season – only Dak Prescott has more (nine, in 2016) among rookies in the Super Bowl era.

Former NFL offensive lineman Brian Baldinger, the one to pose the very question to open this article, has been hugely impressed by what he has seen of Jones.

“The quarterback doesn’t make any mistakes,” Baldinger told Inside The Huddle (Sky Sports NFL, Tuesdays, 9pm). “He had four incompletions on the day [against the Browns], to three touchdown passes. That’s a pretty good ratio.

“I remember coming out of Alabama he completed 78 per cent of his passes, but everyone said, ‘that’s Alabama, they’re just better than everybody else’.

“No, that’s who he is. He is a precision passer. When you look at quarterbacks, you’re checking ‘do they have poise and are they accurate’? Those two things take you a long way and that’s what Jones is.

“He is getting the ball to all of their weapons. They signed Kendrick Bourne, Hunter Henry, Jonnu Smith, Nelson Agholor, to give this offense a lift; he has the timing, the rhythm with those receivers and he’s getting the ball into their playmakers’ hands.

“This team could go a long way with the way he’s playing right now.”

And, as Baldinger suggests, it’s not just Jones who is impressing. Rookie running back Rhamondre Stevenson delivered his first 100-yard rushing game in the NFL, and his second-straight with over a ton from scrimmage in the Week 10 shellacking of the Browns, plus there’s starter Damien Harris – who tallied three 100-yard efforts earlier in the season – who returned against Atlanta following a concussion. Bourne has excelled as a gadget guy at receiver, while tight end Henry found the endzone seven times in as many weeks before going scoreless against the Falcons. The best of the action from the clash between the New England Patriots and the Atlanta Falcons in Week 11 of the NFL season.

The best of the action from the clash between the New England Patriots and the Atlanta Falcons in Week 11 of the NFL season.

The next test for this team is a Sunday meeting with the current AFC-leading Tennessee Titans (8-3), but one who suffered a shock 22-13 loss to the Houston Texans last weekend (2-8).

“There are a lot of positives right now in New England and I don’t think they’re going to let off the gas and become complacent,” Simms added.

“They’re hot. I wouldn’t be shocked to see them continue to rip off a bunch of wins.”

Can anybody stop the Patriots? Just like in 2001, the answer could well be ‘no’.

Watch the New England Patriots (7-4) in action at the Tennessee Titans (8-3) as part of the NFL Sunday triple-header, live on Sky Sports NFL from 5pm.

As Russia’s courts muzzle Memorial human rights group, activists stress that ‘the truth is on our side’