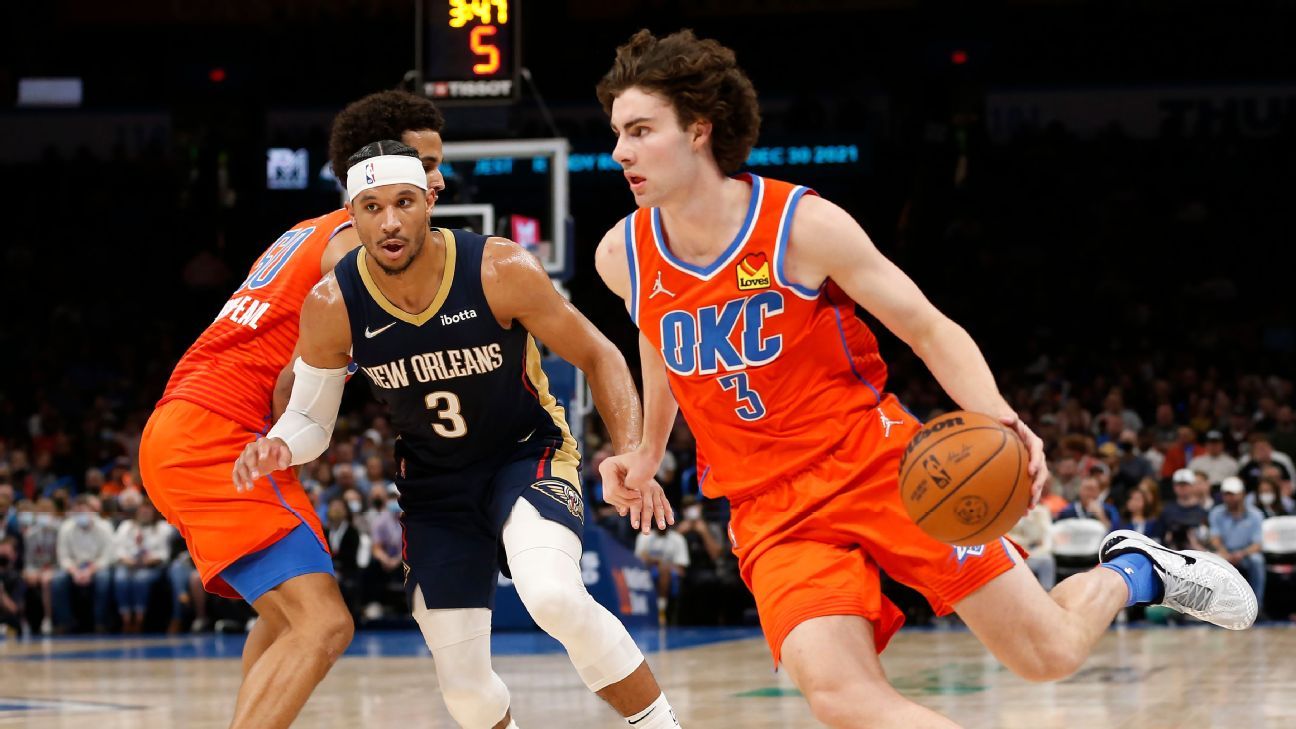 Who is trending up? Which rotations are changing? What’s the latest with the notable injuries around the NBA?

Here’s a look around the league at the most fantasy relevant news and notes for all 30 teams:

Atlanta Hawks: Bogdan Bogdanovic and John Collins are two of four players in the health and safety protocols for the Hawks. The good news is that both are expected to return sometime this week. Bogdanovic has averaged 11.7 PPG this season and is available in 50% of ESPN leagues.

Boston Celtics: On Wednesday against the Spurs, Robert Williams III returned from the protocols. In 32 minutes, the Celtics’ big man had six points, nine rebounds, two assists, a steal and two blocks. The games ahead will be much more productive. To refresh your memories, Williams has averaged 14 points and 12.5 rebounds per 40 minutes this season.

Brooklyn Nets: With Kyrie Irving returning, it was encouraging to see Nic Claxton remain an integral part of the Nets rotation, putting up 12 points and five rebounds in 23 minutes. Claxton has averaged 13.3 PPG, 5.9 RPG, 1.5 APG, 1.0 SPG, and 2.0 BPG during his last eight games. He could continue to start in place of LaMarcus Aldridge for the rest of the season. Claxton’s available in 87.3% of ESPN leagues.

Charlotte Hornets: Kelly Oubre Jr. was outstanding against the Pistons on Wednesday night. The game marked his sixth outing of at least 25 points off the bench this season, the second most behind Tyler Herro (10). It was also Oubre Jr.’s ninth game with at least five 3-pointers this season. He already has made 110 3s this season, 16 short of his career high set in 2017-2018 with the Wizards. Oubre Jr. is a good source of points and 3s, and is still available in 35% of ESPN leagues.

Cleveland Cavaliers: Kevin Love‘s has started to be rostered in more leagues in recent weeks, but he’s still available in 60% of ESPN leagues. Love, even at this advanced stage of his NBA career, can still provide points, rebounds, triples and assists… as long as he’s healthy. In the last 14 games, the veteran forward has averaged 19 PPG, 8.0 RPG, 4.0 3PM, 2.3 APG and 23.4 MPG.

Dallas Mavericks: The Mavericks have four players in league protocols, including Kristaps Porzingis. Maxi Kleber is serving as Porzingis’ replacement until he returns. If your hoops team needs frontcourt help, Kleber is available in 99% of ESPN leagues and can contribute in multiple categories. Per 40 minutes, he has averaged 12 points and 10 rebounds this season.

Access 4,300+ hours of live coverage from 35 PGA TOUR tournaments each year, including 4 days of coverage at 28 events with four feeds each day. Plus, access replays, originals and more. Stream on ESPN+

Denver Nuggets: In his first game since Dec. 26, Monte Morris made a good showing against the Jazz on Wednesday night. In 29 minutes, he scored 20 points, had two assists, a steal and five 3-pointers. With Jamal Murray out for the immediate future, Morris should continue to see a lot of work. As players come in and out of the league protocols, Morris is available in 84% of ESPN leagues and is a solid streamer.

Detroit Pistons: Saddiq Bey has scored at least 10 points in each of the past 10 games while also averaging 8.0 rebounds and 3.0 assists per game during that span. He is available in 35.5% of ESPN leagues. That said, Bey’s 37.5 FG% for the season is something that needs to be taken into account.

Golden State Warriors: Over the last eight games, Gary Payton II has been superb and is worth considering in most formats, especially deeper leagues. Over his last eight games, Payton has averaged 13.6 PPG, 6.5 RPG, 1.3 APG and 2.0 SPG. He’s available in 90% of ESPN leagues and has performed well since entering the Warriors’ starting lineup.

Houston Rockets: Eric Gordon is having a good season, and the veteran shooting guard provides fantasy managers with solid stats and peripherals whenever he’s on the court. He averages 14.7 PPG and 3.4 APG, and given the rotation of players in and out of the protocols, Gordon is someone to have on speed dial considering he is available in 90% of ESPN leagues.

Indiana Pacers: Lance Stephenson returned to the Pacers in epic fashion. It was the first time a bench player scored 20 points in a quarter over the last 25 seasons. In addition, Stephenson scored 20 consecutive points in a game for his team for the first time this season. Stephen Curry last did this on April 10, 2021. In the short term, given that the Pacers have five players in the league protocols, Stephenson belongs on the streaming radar.

LA Clippers: Luke Kennard was placed in the league protocols on Jan. 1, and he should return sooner rather than later. During December, Kennard was very productive. Over a span of 14 games, he averaged 15 PPG and 3.4 3PG. Kennard is available in 95% of ESPN leagues, and he’s a reliable source of triples if you need them.

Los Angeles Lakers: LeBron James has led the Lakers in scoring in each of the past nine games, and that streak is tied for his longest since joining the Lakers. His previous streak with Los Angeles lasted from February to March 2019. Previously, he had a 26-game streak in 2017-2018, which tied for the longest run of his career. This is a great opportunity to sell high.

Memphis Grizzlies: Steven Adams has averaged nearly a double double (9.0 PPG and 11.2 RPG) over his last six games. As a player available in 56% of ESPN leagues, Adams provides you with points, rebounds and a solid field goal percentage while averaging 25.7 MPG. At the very least, he’s an excellent backup center for most fantasy teams.

Miami Heat: Over the last 10 games, those who streamed Omer Yurtseven have been well rewarded. In that time period, he averaged 10.4 PPG, 14 RPG, 1.2 APG, 1.1 SPG and 0.7 BPG. Surprisingly, Yurtseven is available in 87.6% of ESPN leagues. Even when Bam Adebayo and Dewayne Dedmon return, he’ll still have a role.

Milwaukee Bucks: In addition to Pat Connaughton, the Bucks currently have three players in the protocols. Donte DiVincenzo is also working his way back from an ankle injury. Jordan Nwora now becomes a viable streamer in the near term. This season, Nwora has averaged only 20 MPG, but that has increased to 29.5 over the last week. Nwora averages 17.6 points, 8.4 rebounds, and 2.2 assists per 40 minutes, and is available in 98.7% of ESPN leagues.

Minnesota Timberwolves: In the last three games, Jaylen Nowell has averaged 12.7 PPG, 2.7 RPG, 1.3 APG, and 1 SPG. D’Angelo Russell and Patrick Beverley lower his fantasy ceiling, but he’s still someone you should watch in case additional minutes become available. The former second-rounder out of Washington has averaged 22 points, 5.5 rebounds and 5.4 assists per 40 minutes.

New Orleans Pelicans: If your hoops team needs blocks and steals, then Herbert Jones might be a good addition. In the last 10 games, he has averaged 1.3 SPG and 1.6 BPG. Jones has also averaged 11.3 PPG during that span and is available in 89% of ESPN leagues.

New York Knicks: Derrick Rose is out with an ankle injury, while Kemba Walker has a knee injury, and still Alec Burks is available in 82% of ESPN leagues. The last six games Burks has started have seen him average 14 PPG, 6.0 RPG, 3.7 APG and 1.0 SPG, giving an indication of what he can bring to the table while the Knicks are shorthanded in the backcourt.

Oklahoma City Thunder: In his last six games, Josh Giddey has averaged 13.5 PPG, 9.0 RPG, 7.7 APG and 1.5 SPG. Giddey narrowly missed his third consecutive triple-double on Wednesday against the Timberwolves, and yet the rising rookie is available in 46.5% of ESPN leagues.

Orlando Magic: In his first two games back after returning from league protocols and an ankle injury, Mo Bamba had two underwhelming performances. However, he had a season-high 19 points to go with eight rebounds, an assist, two steals and two blocks in Wednesday game against the 76ers. After a few games, Bamba was able to shake off the rust. He is still available in 35% of ESPN leagues.

Philadelphia 76ers: Tyrese Maxey and Matisse Thybulle are two of five 76ers players in the league protocols right now. Furkan Korkmaza, who’s available in 99% of ESPN leagues, has thrived over the last two games, averaging 22 PPG, 8 RPG, and 3.5 APG. If you need a streamer then consider adding him. However, I’d be remiss if I didn’t mention his low 38.7 FG%.

Phoenix Suns: We should take a moment to appreciate how Chris Paul has exceeded expectations of fantasy managers during his age 36 season. He had 15 assists against the Pelicans on Wednesday night; CP3’s 98th career game with at least 15 assists ties him with Isaiah Thomas for fifth all-time. Currently, he is leading the league in assists with 10.1 APG while also chipping in 14.2 PPG.

Portland Trail Blazers: In addition to Damian Lillard‘s abdominal pain, which may keep him out longer than three games, CJ McCollum‘s collapsed lung has created an opportunity for Anfernee Simons. He has averaged 35.5 points and 7.0 assists over the last two games. Simons is available in 90% of ESPN leagues. Go get him.

Sacramento Kings: Marvin Bagley III has averaged 7.7 rebounds per game over the last seven games. With Richaun Holmes in the protocols, Bagley has had more time to shine. The former lottery pick does not offer many other stats and should not be pursued aggressively in fantasy leagues, however.

San Antonio Spurs: Currently, the Spurs have three players in league protocols, including Doug McDermott. Devin Vassell is a bright spot who has averaged 17 PPG, 4.0 RPG, 2.3 APG, 1.0 SPG, 0.7 BPG and 34 MPG over the last three games. He is available in 92% of ESPN leagues, and his role in the Spurs’ rotation after McDermott returns will be interesting to watch. Put him on your watch list.

Utah Jazz: If you need a streamer in the short term, look no further than Rudy Gay, especially since the Jazz are missing multiple players. Available in 97% of ESPN leagues, Gay has averaged 13.4 PPG, 4.2 RPG, 1.6 APG, 1.0 SPG and 24 MPG during the past five games.

Washington Wizards: Kentavious Caldwell-Pope has averaged 12.6 PPG, 4.3 RPG, 2.0 APG, 1.0 SPG and 1.0 BPG over his last eight games. He averages 30 minutes per game, and he’s available in 94% of ESPN leagues. If KCP can keep up the hot streak, it’s just a matter of time before he’s rostered in more leagues.

No, our Android app doesn’t contain a virus. It’s a false positive from AVG.

No, our Android app doesn’t contain a virus. It’s a false positive from AVG.