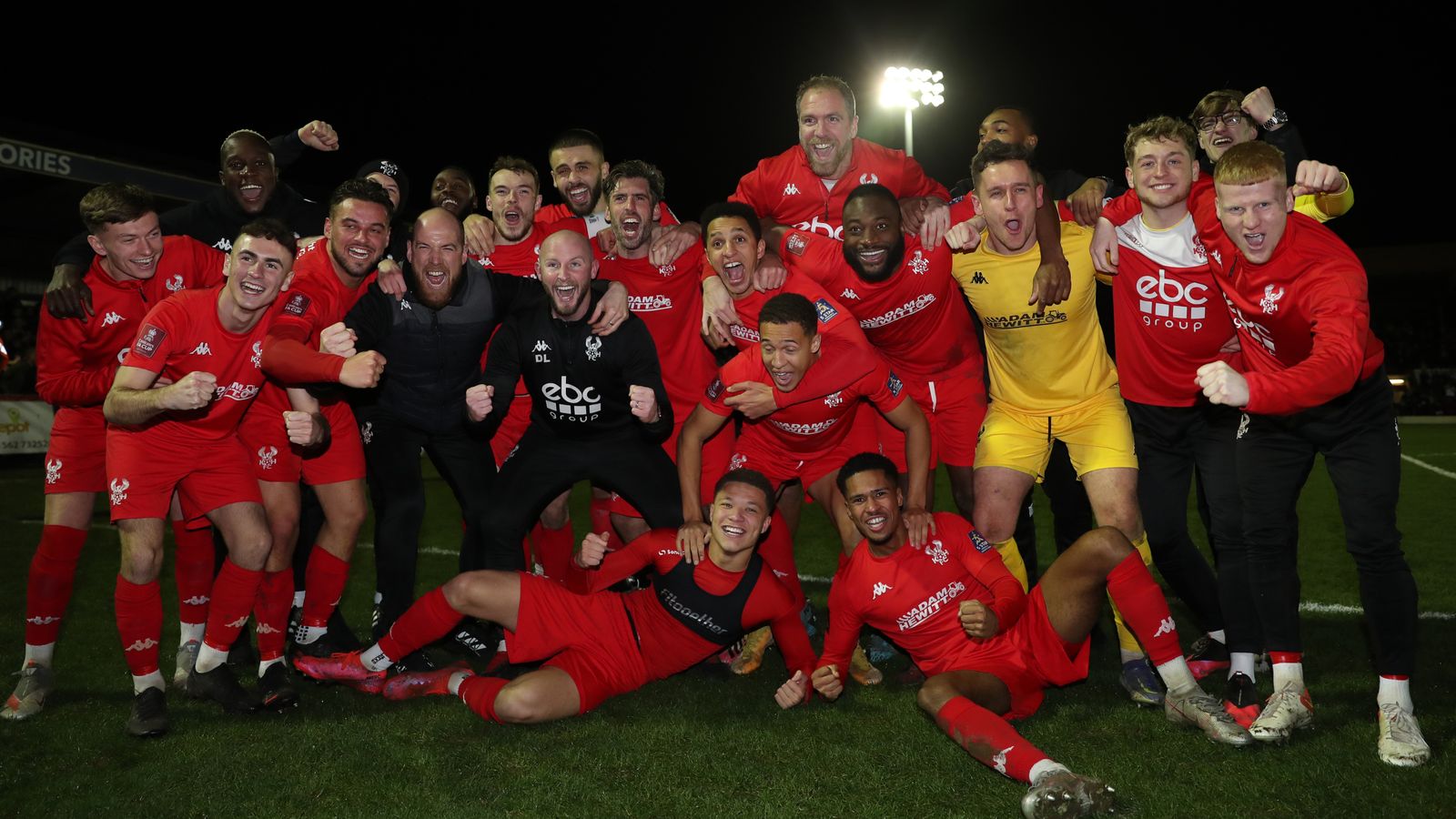 Joe Ironside was the hero as third-tier Cambridge United stunned Premier League Newcastle with a 1-0 FA Cup victory at St James’ Park – and the U’s were not alone in producing a cup upset on third-round Saturday.

Amari Morgan-Smith was Kidderminster’s late hero as they dumped Reading out with a shock 2-1 comeback victory.

The National League North side – the lowest-ranked club left, and 79 places below their Championship visitors – came from behind to stun the Royals by the narrow result.

George Puscas’ first goal for nine months gave Reading the lead before Sam Austin levelled after the break and Morgan-Smith struck with eight minutes remaining to earn a third-round giant-killing.

Defeat increased the pressure on Royals boss Veljko Paunovic as injuries and rotation saw Reading start with six players that were aged 21 or under.

Tyrone Marsh and Adrian Clifton fired National League side Boreham Wood into the FA Cup fourth round for the first time in their history.

Marsh’s spectacular first-half goal and Clifton’s late strike, moments after coming off the bench, secured a 2-0 victory and one of the shocks of the third round against League One AFC Wimbledon.

The Dons, who in their previous incarnation caused probably the biggest upset of them all when they beat Liverpool in the 1988 final, for once found themselves on the wrong end of a cup surprise.

It was a memorable afternoon for Wood and their manager Luke Garrard, who as a player made more than 100 appearances for Wimbledon and helped them to two promotions, as he ended up dumping his old club out of the competition.

Eighteen-year-old Joe Grey stepped off the bench to fire League Two Hartlepool into the FA Cup fourth round for the first time since 2009.

David Ferguson hauled Hartlepool level three minutes after the interval before Grey, who had replaced Mark Cullen moments earlier, kept his nerve to beat Daniel Grimshaw and grab only his second senior goal.

The in-form visitors were left to rue a succession of missed chances in a thoroughly dominant first half, as well as injuries to goal-scorer Anderson and James Husband, who both limped off before the break.

Rovers made their divisional superiority pay within four minutes of the restart. Joe Rothwell fed Khadra, who fired into the bottom corner of Jones’ net to open the scoring.

But with another Rovers goal looking inevitable, Wigan levelled just after the hour mark as Max Power rifled a beauty from distance past Aynsley Pears in the Rovers goal.

Amazingly, Wigan then started to dominate, resulting in them taking the lead for the first time, 16 minutes from time. Jack Whatmough’s header from a corner looked routine enough for Pears to deal with, but the goalkeeper somehow succeeded in catching and then carrying the ball over the line for a comical own goal.

There was still time for a winning goal to settle an incredible game when, deep into stoppage-time, Wigan substitute Aasgaard sent over a curling strike from the left wing that completely deceived Pears and found the top corner of the net to edge Latics into the fourth round.

Barnsley were forced into extra time by 10-man Barrow but eventually claimed a 5-4 victory at Oakwell in one of the most incredible FA Cup matches seen in recent years.

Barnsley opened the scoring in the 23rd minute after Callum Styles whipped in a brilliant free-kick and captain Mads Andersen leapt the highest to head past Barrow’s number one.

Finding an equaliser became a much tougher ask when Barrow striker Tom Beadling was sent off for a high challenge on Romal Palmer after 38 minutes, and things went from bad to worse for the fourth-tier side after 42 minutes when Jordan Williams mishit his first attempt but made no mistake from the second to give the Tykes a comfortable lead going into half-time.

Barrow’s Ollie Banks then scored a goal of the round contender in the 61st minute with a thunderous free-kick from the Barrow skipper to reduce the deficit before the first equaliser of the night came after 78 minutes when substitute Luke James found debutant Anthony Glennon in the box and the debutant finished confidently to make it 2-2.

Barrow’s joy was short-lived as striker Devante Cole curled in from distance after 83 minutes to give the Tykes the advantage once more, but the Bluebirds refused to be beaten and three minutes later, Remeao Hutton’s cross was met by James Jones who headed powerfully past Walton to level the scores again.

Substitute Carlton Morris must have thought he had won it for Barnsley when he scored in the 88th minute but, unbelievably, Josh Kay, another man to come off the bench, drilled in from distance in the 90th minute to take this amazing tie into a further 30-minute period.

Morris got his second of the evening 12 minutes into extra time and that goal proved to be enough to see Barnsley through to the fourth round but Barrow will go home very proud of their performance.

Goalkeeper Jordan Archer was taken to hospital after suffering a shoulder injury while making the decisive save as QPR beat Rotherham on penalties to secure a place in the FA Cup fourth round.

League One leaders Rotherham went ahead eight minutes into extra time when Wes Harding’s long diagonal ball from the right dropped to fellow defender Michael Ihiekwe, whose low shot went in off the far post. But Rangers equalised with five minutes remaining.

Lyndon Dykes’ header from Albert Adomah’s right-wing cross was tipped against the underside of the bar by Josh Vickers but the ball then ricocheted off the keeper’s back and over the line.

Rangers prevailed 8-7 in the shoot-out after extra time ended with the score at 1-1. Archer’s save from Chiedozie Ogbene took the Championship promotion contenders through, but the goalkeeper had to be helped off after several minutes of treatment.

The midfielder’s inswinging cross from the right in the 105th minute was missed by attackers and defenders alike and crept inside goalkeeper Max O’Leary’s far post.

It was rough justice on City, who had been the better side for much of the game, but failed to capitalise on some excellent chances.

League Two Mansfield Town were pipped at the death after a brave fightback in a 3-2 home FA Cup third-round defeat by Middlesbrough.

The Stags dominated the second half and thought they had forced extra time when Rhys Oates levelled after 85 minutes only to be undone by a John-Joe O’Toole own goal in stoppage time.

Uche Ikpeazu gave Boro the perfect start with a brilliant solo goal after four minutes before Caolan Boyd-Munce doubled their advantage with his debut goal on 14 minutes.

The goal Mansfield had threatened finally came after 67 minutes as Oliver Hawkins guided home a header from six yards and, with five minutes remaining, Rhys Oates rounded the goalkeeper to tuck away an equaliser.

But in the fifth added minute, Boro snatched it as Isaiah Jones sped down the right and, sliding in to block, O’Toole could only turn the ball into his own net.

New signing Bali Mumba made an instant impact with a debut winner to fire Peterborough to a 2-1 FA Cup third-round victory over Bristol Rovers.

The loan capture from Norwich was sent on by boss Darren Ferguson at the break and responded with the decisive strike in the 63rd minute.

Mumba burst forward, swapped passes with Sammie Szmodics and classily fired into the bottom corner to ensure the Championship strugglers eased past their League Two visitors.

Szmodics had earlier given Peterborough the lead, only for Paul Coutts to level with a penalty on the half-hour mark.

When is the FA Cup fourth-round draw?

The draw for the FA Cup fourth round will take place on Sunday, January 9 after West Ham’s clash with Leeds at the London Stadium at around 4.50pm.

Portugal bars companies from contacting employees off hours and requires other protections for remote work.

European stocks seen higher on signs of hope about omicron