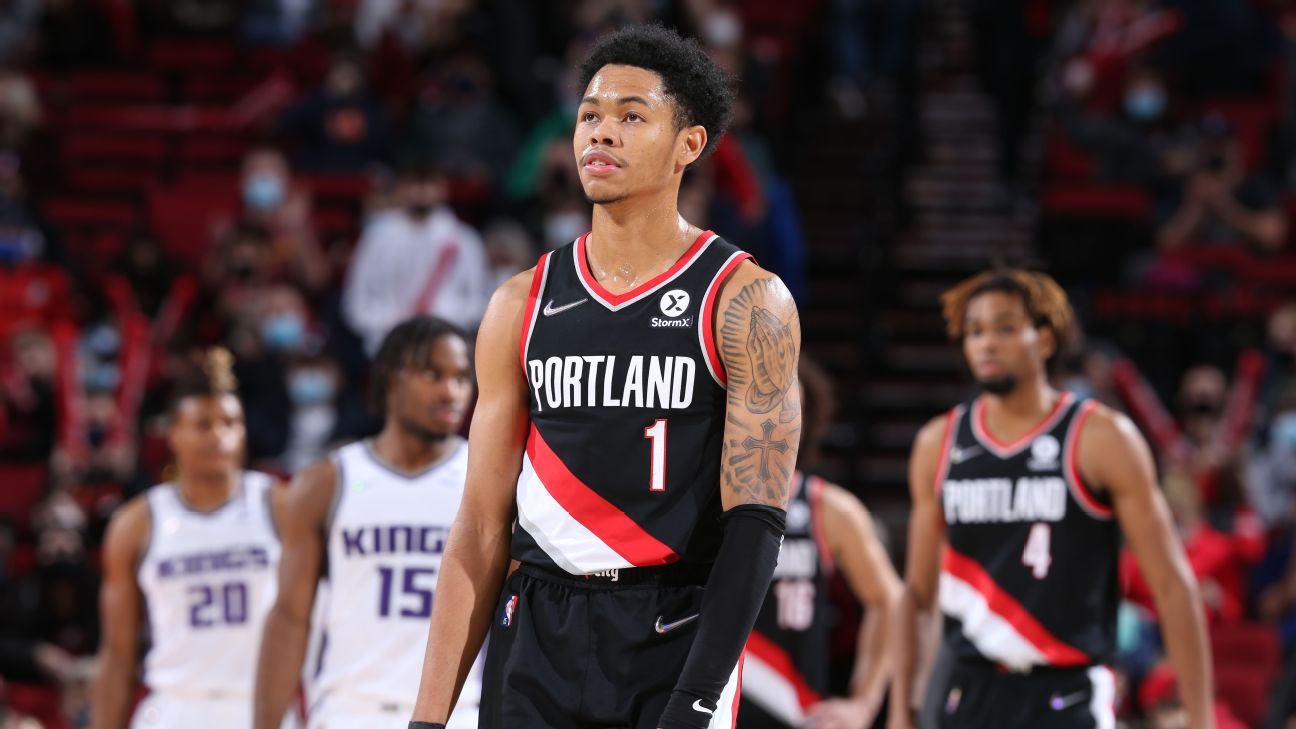 Who is trending up? Which rotations are changing? What’s the latest with the notable injuries around the NBA?

Here’s a look around the league at the most fantasy relevant news and notes for all 30 teams:

Following a two-month absence due to wrist surgery, De’Andre Hunter has returned to action. In light of the Hawks trading Cam Reddish to the New York Knicks on Thursday, he should be stashed. When his conditioning improves, he could be a difference-maker in the final stretch. Hunter averaged 16.2 points, 3.7 rebounds, and 1.0 assist per 40 minutes.

As we approach the trade deadline, rumblings around the Celtics may make some fantasy basketball managers queasy. However, Robert Williams III is one player you shouldn’t be concerned about being dealt. Averaging 10 points and 9.0 rebounds per game this season, Williams signed a four-year, $48 million extension that starts in 2022-2023. In fantasy drafts, the Time Lord has outperformed his average draft position and seems to be part of the Celtics’ core moving forward.

As the Nets play three games in the next five days, Day’Ron Sharpe finds himself on the streaming radar. LaMarcus Aldridge (foot) and Nic Claxton (hamstring) are both injured. On Wednesday night, Sharpe scored a career-high 20 points with seven rebounds and a block against the Bulls. He is available in virtually all ESPN leagues.

Access 4,300+ hours of live coverage from 35 PGA TOUR tournaments each year, including 4 days of coverage at 28 events with four feeds each day. Plus, access replays, originals and more. Stream on ESPN+

P.J. Washington has struggled mightily the last three games, averaging 4.7 PPG, 7.7 RPG, 1.7 SPG and 1.0 BPG. This, along with his 26.3 FG%, is tough for fantasy managers to absorb. There are two Hornets currently in league protocols: Kelly Oubre Jr. and Vernon Carey Jr. Washington is in a great spot to bounce back against the Orlando Magic on Friday. Power forwards have averaged 25 points and 11 rebounds against Orlando this season.

Due to Derrick Jones Jr.‘s right leg injury, Alfonzo McKinnie may be given more playing time. Currently, he averages 15 MPG. Per 40 minutes, he averages 14 points, 5.4 rebounds and 1.0 assists. McKinnie should be considered in deeper formats and is available in virtually all ESPN leagues.

With Isaac Okoro (elbow) and Rajon Rondo (hamstring) out right now, Lamar Stevens is worth considering in many fantasy leagues. In the last six games, he averaged 11.3 PPG, 3.7 RPG, 1.7 APG. Stevens is available in nearly all ESPN leagues and worth a look in deeper formats.

Mo Mooncey of Sky Sports reports that Ben Simmons is considering Dallas as one of two possible destinations if he is traded. If Simmons buys into a Draymond Green-like role with the Mavericks, he could coexist with Luka Doncic. Furthermore, Jalen Brunson should still be rostered. Brunson showed he can coexist with Doncic against the Knicks last night and is available in 41% of ESPN leagues.

Aaron Gordon set a season-high with 30 points and 12 rebounds against the L.A. Clippers. He has scored 10 or more points in four of his previous five games while averaging 5.2 RPG. Gordon is available in 58% of ESPN leagues. It will be good to observe how Gordon performs when Will Barton returns on Thursday.

Aaron Gordon gets up for nice jam

Josh Jackson has played a consistent role with the Pistons off the bench. Since the beginning of January, the former lottery pick has scored 10 or more points in five of his last six games. He’s available in 99% of ESPN leagues and should be considered in deeper formats for scoring, with a dash of other statistical categories.

The return of Klay Thompson may negatively impact Gary Payton II (available in 93.6% of ESPN leagues) offensively as his workload increases, but Payton should continue to have a positive impact defensively. In the last 10 games, he has averaged 5.5 RPG and 2 SPG. Payton has averaged 18 MPG this season and should be considered in deeper formats. .

In addition to his 31-point performance against the Spurs on Wednesday, Eric Gordon has been a valuable streaming option and source of points and triples for fantasy managers at different points this season. However, given the Rockets poor record, which could result in younger players being provided more minutes, Gordon could be traded as we approach the league deadline. He is someone to sell high on or leave on the wire.

In his limited minutes, Lance Stephenson has made an impact for the Pacers and is worth adding to most fantasy teams. Even with Malcolm Brogdon sidelined due to an aggravated Achilles injury, Stephenson is available in 92% of ESPN leagues. Stephenson has averaged 16.5 PPG, 2.0 3PG, 6.5 APG, 4.3 RPG, and 2 SPG over his last four games.

Over the last two games, Amir Coffey has been phenomenal for the Clippers. Coffey followed up his 21-point performance Sunday with 18 points, five rebounds, seven assists and four steals against the Nuggets on Tuesday. Paul George may not return for the rest of the season, so Coffey should continue to get plenty of work and is available in almost every ESPN league.

Austin Reaves has averaged 17.5 PPG and 25.5 MPG over the last two games. During that time, he has also made 5-9 3-point attempts. Look no further than Reaves in deeper formats if you need points and triples. He is available in nearly all ESPN leagues.

The Grizzlies are shorthanded, without Steven Adams (protocols) and Kyle Anderson (back). Brandon Clarke has entered the rotation. Only Isaiah Stewart (12), Daniel Gafford (12), Robert Williams III (18), Myles Turner (18) and Jaren Jackson Jr. (19) have more blocks in January than Clarke (10). The last two weeks, he has been a top-100 player in category formats, and he is available in 62% of ESPN leagues.

Heat forward Bam Adebayo is about a week or two away from returning from his thumb injury, and they also got Dewayne Dedmon back from his knee injury. If you have Omer Yurtseven on your roster, hold onto him. In the last two weeks, he averaged 11.5 points, 15 rebounds, 2.5 assists, and 1.5 steals. Yurtseven is available in 80% of ESPN leagues. It is possible he will replace Dedmon in rotation going forward.

With Jrue Holiday out with an ankle injury and George Hill in heath and safety protocols, the Bucks have relied on Khris Middleton more to provide offense. Middleton has averaged 25 PPG, 7.3 RPG, 7.3 APG and 1.5 SPG in his last four games. Since fantasy managers were hoping for a bit more from Middleton before the season started, this is a great opportunity to sell high on him.

Malik Beasley remains a source of points and triples for the Timberwolves and fantasy managers alike. He scored 18 points, grabbed four rebounds and made six 3-pointers against the Pelicans on Tuesday night. But Beasley has averaged just 10.5 points and 2.8 3-pointers over the last six games. He’s available in 64% of ESPN leagues.

In Wednesday’s game against the Mavericks, RJ Barrett became the youngest player in Knicks history to have consecutive 30-point games. He surpassed Kristaps Porzingis, who was 22 years, 80 days old at the end of his streak in October 2017. This is a thrilling turn of events for Barrett, who has the skills to contribute in multiple statistical areas.

Even though Josh Giddey continues to flirt with triple doubles night after night, he remains available in 40% of ESPN leagues. He’s averaged 14 PPG, 9.2 RPG, 8.2 APG, and 2.0 SPG in his last five games. Giddey’s trajectory should only continue upward from here. I wrote about him last week and will continue to do so until his roster percentages rises.

The emergence of Gary Harris this season has been a pleasant surprise. In his last 13 games, Harris has averaged 18 PPG, 3 3PM, 2.2 RPG, 2.2 APG, 1.3 SPG and 0.5 BPG. Harris should continue to thrive in the absence of rookie lottery pick Jalen Suggs; the veteran has played 29.5 MPG this season and has the ability to help your team in 3-pointers and 3FG% along with his other contributions.

Furkan Korkmaz stands to benefit if Danny Green misses significant time with his knee injury. Korkmaz averaged 16 PPG, 7 RPG, 3. APG, and 2.5 3PG in four starts while Tyrese Maxey was in the protocols. Korkmaz is available in 98.4% of ESPN leagues.

In 35 minutes against the Raptors, Jae Crowder had 19 points, five rebounds, three assists and two steals. It was his best overall game since returning from the protocols. Currently, he’s available in 89% of ESPN leagues and should be on your watch list to see if his statistical production can continue.

Damian Lillard plans to undergo surgery in the near future to treat his lingering abdominal injury, and will be evaluated in six to eight weeks. It’s possible that the Trail Blazers shut him down for the season considering their poor record. In the second half of the season, Anfernee Simons has the opportunity to be a difference-maker. Simons logged 37 MPG in the last five games he started for Lillard, and during that time he averaged 28 PPG, 3.2 RPG and 7.6 APG. Somehow, he’s still available in 70% of ESPN leagues.

Anfernee Simons attacks the rim and somehow drops in a layup through contact for the Blazers.

Look no further than Marvin Bagley III (39% rostered) if your team needs a big man. Over the last five games, he has averaged 9.6 PPG and 8.0 RPG, but be sure to monitor the hand injury Bagley sustained during Wednesday’s game against the Lakers.

Devin Vassell can be very divisive when fantasy managers hear his name. In the three games before he entered the league protocols, he averaged 17 points, 4 rebounds and 2.3 assists. As the season progresses, Vassell’s usage could increase. You should stash him if you have the capacity since he is available in 94.3% of ESPN leagues.

The fact that Raptors coach Nick Nurse spoke positively about Chris Boucher in the media should surprise fantasy managers. In 37 minutes against the Suns on Tuesday, he scored 13 points, grabbed 16 rebounds and blocked three shots. Despite being available in 43.8% of ESPN leagues, Boucher has the potential to be a difference-maker if he plays 30 minutes or more per game. Unfortunately, he’s at 18.3 MPG for the season.

COVID-19 is disrupting the Jazz in a major way, with five players in the protocols, including Rudy Gobert. If a fantasy manager is looking to capitalize on this situation from a streaming perspective, then consider Eric Paschall since he is Utah’s only big man. He had 18 points, seven rebounds and a block against the Cavaliers on Wednesday night.

Bradley Beal‘s inclusion in the league protocols clearly benefits Kentavious Caldwell-Pope. Those in deeper formats can stream Corey Kispert, who has scored at least 10 points in the last two games. Kispert provides some rebounds and assists as well.

Yellowjackets: Casting the other adult characters

Many Pacific Island nations have kept Covid at bay. But attempts to reopen are fraught with danger