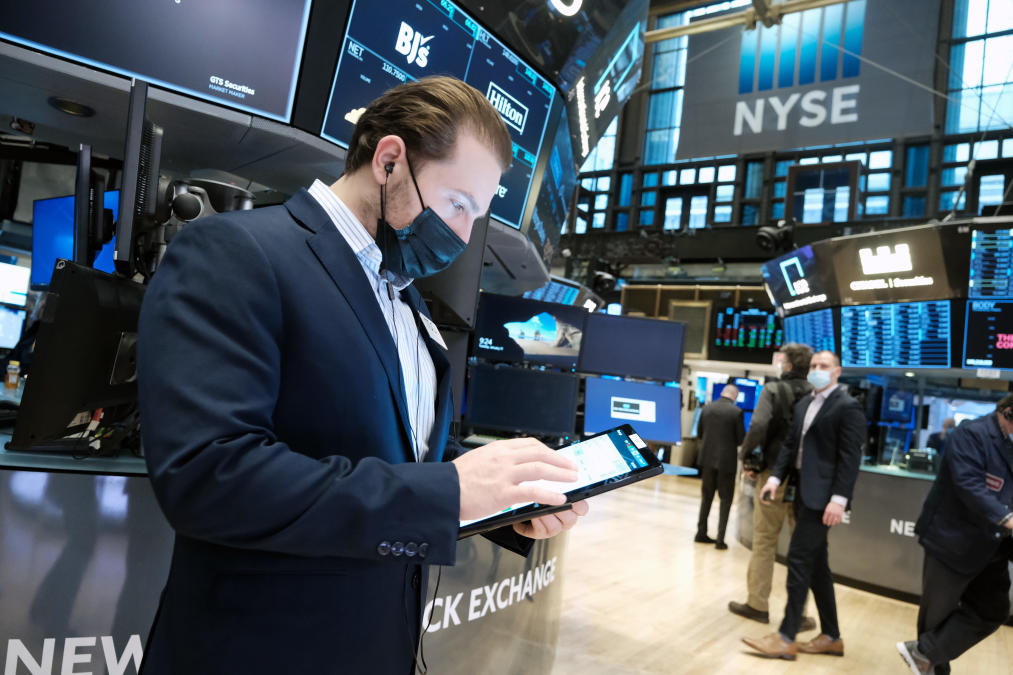 Stocks declined on Friday at the end of a volatile week, with investors monitoring a mixed set of bank earnings and a bigger-than-expected drop in U.S. retail sales.

The S&P 500 and Dow dropped. The Nasdaq fluctuated between gains and losses after a 2.5% drop on Thursday.

Peer bank Wells Fargo (WFC) shares rose, on the other hand, after posting quarterly revenue that topped estimates as both commercial and consumer loans picked up at the end of last year.

New economic data came in weaker-than-expected on Friday, adding to the risk-off tone in markets. U.S. retail sales fell 1.9% in December month-on-month, missing estimates for an only 0.1% dip and marking the biggest drop since February 2021. November’s sales were also downwardly revised to show 0.2% monthly increase, compared to the 0.3% rise previously reported.

Investors this week have been weighing concerning signs of lingering price pressures across the U.S. economy against assertions from key central bank officials that the Federal Reserve is ready to take action to bring down inflation. JPMorgan Chase CEO Jamie Dimon said during this morning’s earnings call that

In Fed Governor Lael Brainard’s hearing before the Senate Banking Committee on Thursday, she suggested the central bank could begin raising interest rates — a move that would tighten financial conditions and help bring down inflation — “as soon as asset purchases are terminated.” The Federal Reserve is currently set to end its asset-purchase tapering process in March.

“What we’re seeing right now is a repricing of the markets, given anticipated rate hikes… That’s going to be the catalyst driving down the market,” WealthWise Financial CEO Loreen Gilbert told Yahoo Finance Live on Thursday. “It’s going to be a wild ride.”

And the bevy of recent inflation data has so far helped strengthen the case for a near-term move on monetary policy, many economists suggested. Thursday’s Producer Price Index (PPI) showed the biggest annual rise in wholesale prices on record, in data going back to 2010, even as monthly price gains moderated slightly. And this report came just a day following the December Consumer Price Index (CPI) showing the biggest surge in inflation since 1982. Many economists suggested inflationary pressures would continue at least through the first months of this year before gradually easing.

“Two of the biggest things have been the supply chain disruptions and the fiscal stimulus,” Matthew Miskin, John Hancock Investment Management co-chief investment strategist, told Yahoo Finance Live. “As the pandemic comes more under control this year, as the Omicron wave hopefully dissipates, we likely see the supply chain disruptions come off, and then we’re not going to get more fiscal stimulus … That in our view does cause inflation to come down over the course of the year.”

Rising prices have also been hitting companies’ profits as labor costs jump. Of the nearly two dozen S&P 500 companies that had reported fourth-quarter earnings results as of mid-week, 60% of these cited a negative impact from higher labor costs or shortages to sales or profits, according to FactSet.

The Biden administration announced its nominees to fill out the Federal Reserve Board of Governors, tapping Sarah Bloom Raskin, Lisa Cook, and Philip Jefferson for the roles. Each nominee must still go before the Senate Banking Committee for confirmation.

The U.S. manufacturing sector showed more signs of slipping amid the latest surge in COVID-19 cases and materials shortages.

According to new Federal Reserve data Friday, manufacturing output declined by 0.3% in December to reverse course after a 0.6% rise in November. Consensus economists were looking for a 0.3% monthly rise in production in December, based on Bloomberg data. Manufacturing accounts for about 12% of overall economic activity in the U.S.

A drop in auto production contributed heavily to the headline decline, with ongoing chip shortages impacting the industry. Vehicle production was down 1.3% in December following a rise of 1.7% in November.

10:11 a.m. ET: University of Michigan sentiment index drops to 68.8 in January, in second-lowest reading in a decade

Consumer sentiment fell more than expected in early January to reach one of its lowest readings in 10 years, as concerns over the inflation outlook and COVID-19 weighed on optimism.

The University of Michigan’s preliminary January Surveys of Consumers index came in at 68.8, falling from December’s 70.6. This was below consensus estimates for a reading of 70.0, according to Bloomberg data.

“While the Delta and Omicron variants certainly contributed to this downward shift, the decline was also due to an escalating inflation rate,” Richard Curtin, chief economist for t he Surveys of Consumers, wrote in a statement. “Three-quarters of consumers in early January ranked inflation, compared with unemployment, as the more serious problem facing the nation.”

Overall, consumers’ one-year inflation expectations edged back up to 4.9%, or the highest level since 2008, from December’s 4.8%.

Here’s where markets were trading just after the opening bell Friday morning:

Retail sales posted a large-than-expected drop in December, as consumer spending pulled back from earlier in 2021.

The total value of U.S. retail sales was down 1.9% in December compared to November, the Commerce Department said Friday. This was the first monthly drop since July, and the biggest decline since February 2021. Consensus economists had looked for a dip of just 0.1%, according to Bloomberg data. In November, retail sales rose 0.2%, with this figure also downwardly revised. from the 0.3% rise previously. reported.

By category, non-store retailers, or e-commerce stores, saw by far the biggest drop in monthly retail sales, with these falling 8.7% in December. Department stores also posted a 7.0% drop in sales, and furniture and home furnishing sales declined by 5.5%. Still, the weakness was broad-based in December, and nearly every category of retailer saw a monthly drop in sales. Notably, building material stores saw a nearly 1% sales rise during the month, and miscellaneous store retailers’ sales rose by 1.8%.

7:43 a.m. ET: ‘The economy continues to do quite well despite headwinds related to the Omicron variant’: Dimon

JPMorgan Chase CEO Jamie Dimon struck an upbeat tone about the trajectory of the economic recovery even given the latest disruptions caused by the rapidly spreading Omicron variant.

“The economy continues to do quite well despite headwinds related to the Omicron variant, inflation and supply chain bottlenecks,” Dimon said in the bank’s fourth-quarter earnings report on Friday. “Credit continues to be healthy with exceptionally low net charge-offs, and we remain optimistic on U.S. economic growth as business sentiment is upbeat and consumers are benefiting from job and wage growth.”

Both JPMorgan Chase and Wells Fargo cited an increase in loans as contributing to results at the end of last year, suggesting consumers and businesses were remaining confident in borrowing and spending.

However, JPMorgan’s fixed-income and stock-trading businesses saw sales fall over last year. Fixed income sales and trading revenue declined 16% over last year to $3.33 billion, which the bank attributed to “a challenging trading environment in rates, as well as lower revenues in credit and currencies & emerging markets compared to a strong prior year.” Equities sales and trading revenue dipped 1.8% to $1.95 billion.

Overall, adjusted revenue grew 0.6% over last year to reach $30.35 billion, topping estimates for $30.01 billion, according to Bloomberg data. Earnings per share were $3.33, exceeding expectations for $2.99.

Here’s where markets were trading before the opening bell:

Read the latest financial and business news from Yahoo Finance